I started crying the night before as I wrote the thank-you note to her teacher.  I would post the letter here, but I'd just start crying again as I typed it out.  What this woman meant to my daughter is impossible to capture in a card.  My friend Julie called her daughter's first teacher in the U.S. a "first responder," and I find this a good description.  Our daughter's teacher was also a surrogate mother from 8:30-3:00 every day, a woman who went above and beyond to make sure Beti felt secure, nurtured, supported and validated at every moment of her day at school.  That is not an exaggeration: at every moment.  She never once flinched at the prospect of welcoming at the 11th-hour a newly adopted child from a foreign country who spoke virtually no English.  She will forever be one of my life's heroes.

On the last day of school, she showed all the kids and parents the 20-minute DVD she's put together of highlights from the year, set to Michael Jackson and White Stripes songs.  A solid half of the parents were crying through it.  She gathered all the kids together, stood above them, pulled out a wand, and declared them all first-graders.

The kids ran to hug her, and after it was Beti's turn, I grabbed her too and thanked her.  I held on tight.  I couldn't hold back the tears, and as she hugged me, she assured me that Beti would be okay and that she could write her as many emails as she wanted over the summer and come visit next year.  I squeakily and tearfully asked, "Can I come too?"

I have always loved and respected the teachers I've known, but now that I'm a parent of school-aged children, the value I give them has grown exponentially.  We are so lucky, so thankful, so happy that Beti experienced what could not have been a better kindergarten year.

What an emotional week.

It started with my excitement about going all by myself on a trip to the newfangled "JCP" store to look for a swimsuit for myself and Father's Day gifts for next weekend.

I sent Ted a photo of myself in a suit that made it look like I actually had something up top.  He showed it to the kids, which they thought was hilarious.  Mama usually ain't got cleavage.

JCP will make you sexy, you know it.

Later, I drove across the street to look at discount shoes and then walked two stores down to a party supply place.  I was in these stores only twenty minutes, and my car was gone.  This was not one of those complicated, multi-layed parking garages.  It was just plain ole outdoor lot in front of a strip mall, and my car was missing.  I wandered around for five or six minutes, getting more and more panicky.  I felt the heat rising in my neck.  One of my first thoughts was about my brand-new swimsuit that was just stolen along with the car, dammit.

I called Ted to tell him what was up.

"Honey, the car is gone.  It's just not here.  I was only in there for twenty minutes, and it's just gone."

I went into the first store and told them to call security, and they told me to call the police.  "You mean, just, like, dial 911?"

"Yes ma'am.  They're right around the corner."

So I walked back outside and called the police.  I kept scouring the parking lot, but I had remembered the exact spot I'd been in, and my car was simply not there.  I tried to be calm as I talked to them about my emergency.  Since first realizing I couldn't find the car, I'd been hitting the 'lock' button twice to listen for that telltale "beep" of the horn to signal where my car was.  I hadn't heard anything at all.

At least not until I was on the phone with the 911 operator, having already given my name, phone number, car make, model and year.

I had just bought a JCP swimsuit for myself and then completely lost all memory of having driven my car from one end of a parking lot to another.  And not only that, but I was so convinced my car had been stolen that I acted on my panic and called the police.

(In case you're wondering why I'd driven my car from one side of a parking lot to another, it's because I hadn't seen the party supply store until I was leaving this strip mall.  I'd done a quick turn-around to go to the other store.)

That is the end of my little story about how I'm getting old.  It is not poetic or profound or anything.  Just me losing my mind.

The Garden of Your Mind

I am unashamed to admit that I love Mr. Rogers.  Beti loves when we watch the show online.  Whenever he asks a question to his television friends, she always answers him out loud as if he were sitting across from her.  She used to do this when she first got here and would watch Tsehai Loves Learning.  I love this about her. Abe complains when we watch Mr. Rogers, saying that it's "boring," but one night this week, when Mr. Rogers suggested we all go to the land of make-believe, Abe sat up straight and yelled, "Oh! I love this part! Yay!"

I am also unashamed to admit that I sat through this video with a growing smile on my stupid face and then was crying by the end of it.  There was never a purer soul than Fred Rogers.

While sitting waiting for the parade to start tonight, it hit me that at last year's parade, I had just returned from meeting Beti in Addis Ababa.  I was still jetlagged even.  I'd met her.  I'd put a temporary tattoo on her arm, watched her push the little kids around on a decrepit push-toy, and then I'd had to leave her there.  She has told me that she knew who I was even though she wasn't supposed to know who I was.  At last year's Starlight parade in downtown Portland, my neighbors and family were sitting around me while she was with her friends in Addis.

This year, she and Ted ran the 5k Starlight Run.  She wanted to dress as Darth Vader in a clown wig.  Ted tried to put together an Obi Wan costume but we didn't have any brown hooded things laying around the house, so at the last minute he ran as a Scottish 1950's high school basketball player in black leggings.

She, of course, was one of the first kids to finish the race.  They didn't keep track of it, but my suspicion is that she was the youngest to finish first.  I just saw some bigger boys ahead of her, plus adults.  Then her.  In a Darth Vader costume.  Holding her dad's hand and slapping her brother's hand as she ran by.  I yelled loudly and tried to get a picture, but she was way too fast.

It got dark and the parade started (the grand marshals were these guys who were as adorable in person as they are in this famous video).  The firefighters started the parade with a routine of taking turns jumping off a ladder onto a hand-held trampoline.  She turned and asked, "Mom, can I go?"  I let her.  She ran up to them, and they put her on the trampoline and gave her a bounce up in the air.  She ran back with huge smile.  With anything physical, she is fearless.

On the way home, she passed out asleep, mouth gaping open in the back seat.  Inside, she discovered that the dog had chewed the nose off a toy gorilla and thrown it back up.  The dog had also brought down one of her baby dolls and taken his pants off.  She laughed about that.  I laughed too.  I turned to do something.  She fell flat in the middle of the floor and started crying.  I went to comfort her, and she cried-almost-sobbed into my shirt.  I rubbed her back, asked what happened, said to Ted, "One minute she was standing and the next, she's on the floor! I have no idea what happened!"  I was having fears of some running-related latent injury.  She kept crying into my shirt.  Then she looked up at me and smiled.  She was faking.

I was angry.  Really angry.  I scolded her and put her on a chair so I could cool off.  Ted did this to me once the first year we were married.  I was walking out the door, and he collapsed on the floor while grabbing his chest.  I panicked.  I ran at him, grabbing for my phone to dial 911.  He saw the look of panic in my face and let me in on the 'joke'.  There are few things that make me angrier than someone tricking me into thinking they're hurt.  And who does this anyway?  Who is it funny for?  I was livid then, and I was livid tonight.

There are two actors in our house.  Two.  They are both really good actors who commit fully to the role they're playing.  But Sweet Jesus, up on high in our eternal home and residing in our sinful hearts, if either of these actors ever trick me again into thinking I need to get an ambulance for them...  I don't know how to finish this thought.  They both know they better never do it.

I am not an actor. 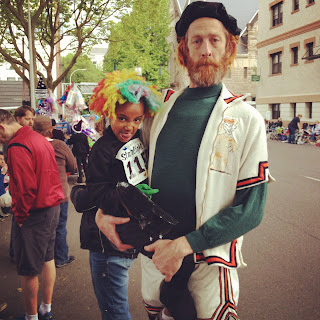