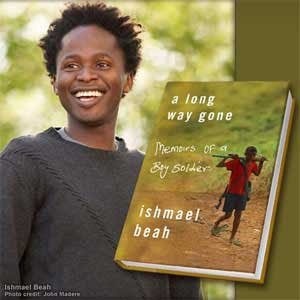 I just finished this afternoon an amazing book, A Long Way Gone: Memoirs of a Boy Soldier, by Ishmael Beah. I found myself last night sobbing at the resiliency the human spirit and the redemption that is found through the consistent, selfless love from compassionate aid workers.

Highly, highly, highly recommended. Here, you can watch a short interview with the author.

I never make it through the Academy Awards without crying at some point. Last night, this was my favorite moment: Man on Wire won best documentary. 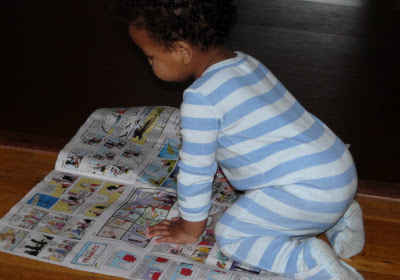 We're having trouble finding the right church for our family, and after a very busy week for all of us, this is what we ended up doing this Sunday morning. Ted even brought home a maple bar and apple fritter from VooDoo Doughnuts to go with our coffee and paper. It was a lovely morning.

Adding to the loveliness was finding a wonderful bit of writing at Bright Beating Hearts. This community of bloggers is lucky to have the soulful, talented Mama Dog in its ranks. You can read it here.

Finally, a very happy birthday to my friend Autumn, mom to the magical Rhett and beautiful Mezmur. I'm lucky to have her. This post was really sweet.
Posted by Lori at 2:14 PM 11 comments:

If I die, what a beautiful death!--Philippe Petit
Though I knew going into the film, Man on Wire, that it all ended well, I couldn't help having sweaty hands at certain critical moments. It truly is a breathtaking story, one with a salute that left me in tears. It's made me think about the bravery of people who dive headfirst into their passion, no matter what the outcome or risks. So many of us hesitate in doing what we love because of the opinions of others. What a stupid thing.

Today Abe and I were standing beside the indoor skating rink watching the ice-skaters go by. One guy drew me in. He was surrounded by kids and a few hard-core ice skaters in leotards and glitter, yet he was in his own world. He was maybe late 20s (I'm guessing) and wore black pants and a tight tshirt that showed off his pudgy middle. He had a page-boy haircut that would whip around his head as he would twirl, salut and dramatically fall down on one knee with both hands reaching high above his head as a tinny version of "All That Jazz" played.

At first I thought it was funny, but as he kept going and going, I got teary. He was obviously enjoying himself, completely unaware of anyone watching him. It was sort of like Phillippe Petit's inability to resist the pull of the wire; the pudgey page-boy outside the pirate-store at the mall couldn't resist the pull of the ice capades, so he dove right in. And whether it's a walk across a tightrope or an impromptu solo show on an ice-skating rink, it's inspiring to see someone experience the joy that comes in shaking off fear. I wish I were more like him.

Do something pretty while you can.
Don't fall asleep.
Skating a pirouette on ice is cool"
--Belle and Sebastian
Posted by Lori at 2:52 PM 5 comments: 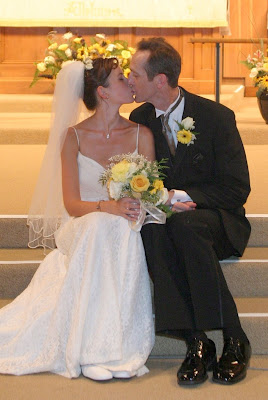 One of the best pieces of advice I got before we got home with Abe was from a mom of four who looked me straight in the eye and ordered me to go to as many movies as I could stand. I was so anxious to get home with Abe that I only sort of took her advice. But now I get it. She was right.

If you are currently without children, do all you can to enjoy this time that you're in now because it surely will end. I was thankful that this mom gave me this advice, but something that no one told us was how annoying your spouse becomes when you have a child. I guess we both thought that because we love each other so much that the addition of another person in our family to love is just going to increase the love exponentially, as if our house was going to filled with laughter and songs and rainbows shooting out of the windows and candy falling from the sky. I was picturing a skittles commercial when I imagined what "life with child" would be like.

While life with Abe is certainly rewarding and often a lot of fun, I was surprised to discover the toll having a child in the house can have on a marriage. We've been through some rough patches since getting home with Abe and think we're coming out on the other side, but I so wish someone had told me that we might go through this. Maybe they did, and I just was not listening. Entirely possible. So I was relieved to read this article in the Sunday Oregonian by Elizabeth Hovde about this issue.

"Quality couple time is hard to come by, even if there is a lot of enjoyable kid time happening. Ohio State University researchers found that after a child is born, couples have only about one-third the time alone together as when they were childless. Further complicating things, children bring extra chores -- especially for women."

I wasn't at all surprised to read that the time together as a couple decreases to only a third of what it was before children. The article also explains that researchers at UC Berkely found out that marital satisfaction increases as children age and reach highest levels when the children have moved out. You can read the entire article by clicking here.

It was reassuring to me to have empirical evidence to support what we have been through in the last 10 months. We're not unusual. We're not crazy, though we have certainly done our part to drive each other a few times to points of exasperation bordering on insanity.

So the solution? We have found that the most practical thing for us is to have at least a weekly time alone, just with each other. We went about six months after coming home with Abe where we only went out once. That is way too long of a stretch. So we found a family nearby that we trade babysitting with, which we try to do weekly. The chance to go out, even briefly for a drink, sans child, does wonders for a relationship.

So for anyone waiting for children right now: it may seem early, but line up a babysitter. I'm not joking. Do it. Find another family who'd be willing to do a child-care trade with you. It's really hard the first couple of times to drive away without your child in the backseat, but believe me, you'll get used to it. You need to get used to it. Eventually, you may get to the point of shutting the car door, looking at each other, and letting out a "Yee haw!" before peeling out.

Secondly, just know that this time does end. It was reassuring to me to hear that these are probably the most stressful years, at least on our marriage. This stress won't last forever. That makes it easier to show little kindnesses to each other and not to get overly exasperated by being unable once again to finish a thought because of the wee one pulling on my pant leg or stepping on my feet (how many times a day do I say, "Abie, stop stepping on my feet please"?). 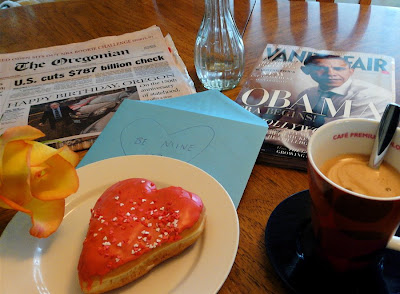 What I awoke to Valentine's morning, some of my favorite things, including my favorite magazine and flower.
Posted by Lori at 2:30 PM 20 comments:

Look who's coming home! We're getting a new neighbor!

Please go read this post and think about contributing. One of the orphanages Children's Hope Chest's online community is sponsoring is in dire need of food right now. Please read. Please help.

Thoughts of Spring and Baby M 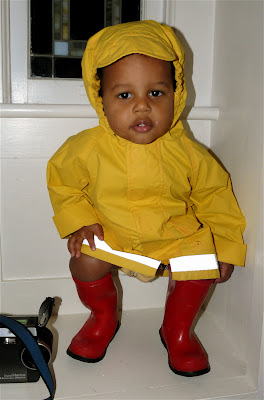 We are so so so ready for spring. I shouldn't complain considering the wonderful weather we've been having (generally) in Portland. But today was cold and rainy, and I'm so over it. We found this raincoat and rainboots at a children's resale shop today, and what fun to toddle around in this outfit, holding hands with Mom. Well, except while we were out, Abe did have on pants. Notice the camera next to Abe? This is the very first digital camera ever made, given to us by some sweet friends last week for Abe to play with.

I'm noticing every day that Abe is looking more and more like a boy, less like a baby. To be expected, but I can't help sighing a little when, during our night-time ritual of cuddles and songs, Abe looks me in the eye to say, "Mom? Nigh-nigh, Bye!" while pointing to his bed. This is very much big-boy behavior, and I guess I just have to be ready for it cause it's surely coming, come hell or high water.

We finally remembered to use the back-pack we found last summer at a garage sale before Abe is too big for it. This was on a trip to the zoo last week. We mostly saw polar bears and penguins--fitting for winter, I guess. 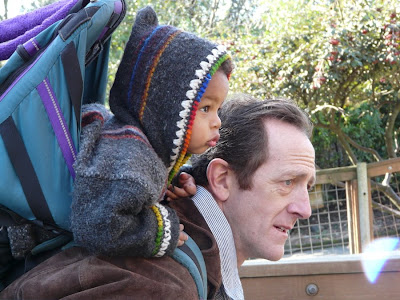 I guess what I'm looking forward to most about warmer weather are more frequent meetings like this one with the kids on our street, the ones who love Abie-baby: 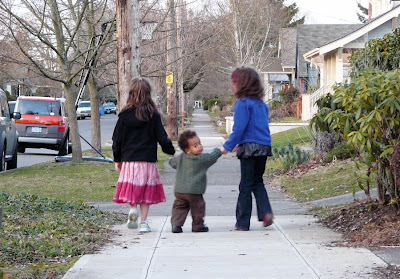 Nearly every day last summer, we were outside on this sidewalk with the neighbors, usually until pretty close to nightfall, which in Portland isn't until well after 9pm. I'm ready for these long days, the lazy days of summer, as they say.

We're thinking and praying hard tonight for Baby M, baby sister to the famous Rhett. Abe played at Rhett's house Friday night while we went to see an amazing play, The Seafarer. It was the first time we've left him that Abe didn't come running to us upon our return. In fact, he loved being there so much that he took one look at us and took off in the other direction, pointing at all the cool stuff he'd been playing with, like the guitar and vacuum cleaner. Rhett is going to a fantastic big brother. Please say a prayer for them too.

Straight out of bed, still waking up, only ingested 2 or 3 sips of coffee before I'm choking up at this, fighting it back until fully awake, the dam breaking lose upon second viewing with Ted:

Go congratulate Drew and Carey on the successful court date for their second daughter, Tigist Rose. A beautiful day, indeed.

(one of these days, I will get back to writing again...just maybe not today)

...and you saw it here first (unless you've seen it already)! Ted and I are cracking up at this kid straight out of dental surgery, still high: