New Realities and a Translation

One of my favorite things in this world is when I get that far-away feeling that comes while "getting lost in a book" for hours and hours. I know it's a cliche. It's true anyway. I encountered this book, I Capture the Castle, twice last week and feel like the universe is sending it my way somehow. There's even one copy left at Powell's on Burnside that I could go snatch up.

But I can't even get through the Sunday paper these days. I have yesterday's Oregonian plus not only last week's New York Times but the week before that sitting there staring at me in our dining room, untouched and alone. How do I think I'm going to make it all the way through an entire book? This is definitely one way that it becomes pretty easy to become entrenched in Kid-land. There's just so little time for reading, and the last movie I saw was Nanny Diaries, which was showing on our flight to London to bring Abe home.

I'm not saying anything new here. There are just a lot of realities I've heard my whole life that have suddenly become visceral and real. Not having time for much of anything is one reality. Another reality is that we tell our friends "funny" stories about poop. Yesterday over Sunday lunch with friends, Ted was even doing an impression of the faces Abe makes when he poops. Deep thoughts there.

Probably the biggest reality I've heard but not grasped fully until becoming a mom is how the world truly does start to feel different when you have this little person in your care who is going to be here after we're gone. The one article I had time to read last week in the NYTimes Magazine was about global warming, and it freaked me out like never before. Oh boy. What world are we passing on? Again, a cliche. But again, it's true.

Finally, there's the sweeping love that seems to engulf me when I look at Abe, a love I'd never understood before. Yesterday while feeding Abe, we were listening to a playlist I'd made for a friend with songs about motherhood, etc. Abe likes to clap when I sing, so I kept trying to get out those Dixie Chicks lines about, "How long do you wanna be loved? Is forever enough? Is forever enough?" and my face just started contorting into ugly-faced crying mode as I looked at this face in front of me, a face bewildered by my crying, a face belonging to a boy who just wants to clap so can't you stop crying, Mom? Geez.
*
We sent on 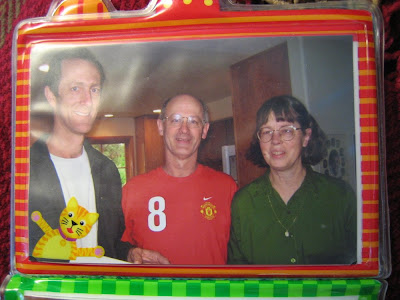 e of these photo books for Abe back when we were waiting for court, and I put in a photo seen here of Ted's big brother and sister (there are nine Rooney siblings in all, and they don't make plastic baby albums that big). I realized this weekend how great it is that Abe has now met his Uncle Steve and Aunt Alice. Both Steve and Alice are nurturers, as can be seen in these pictures: 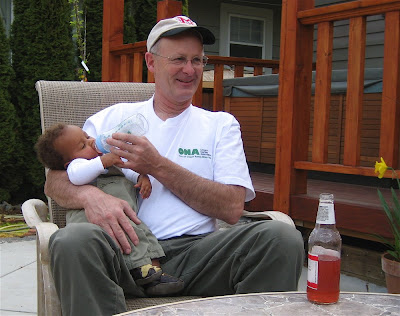 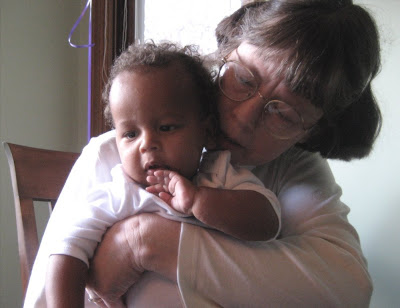 And finally, for those two of you who are just dying to know the translation to "Jozin z Bazin," here you are. My friend Joko helped out with these because somehow I never managed to use words like bog and strangle.

1. I drive a Skoda 100 to camp here on Orava
So I hurry, take a risk and go through Morava
The monster lives there, comes out of the bog
Eats mostly Prague citizens, its name is Jozin (Joseph)

I can't wait to feel that sweeping love!
I am from a family of 9 kids as well!! It is wonderful to be blessed with so much family!

Teehhe. I like, about halfway through when he starts singing in a really high little voice!

As a parent, the best stories of your life will probably involve poop.

And that's cool. Because poop is funny. Except if you are a nurse.

That is so great! I love the boys singing...cutest boys! Are they friends of yours? So fun to hear them singing the song we have been watching over and over. I can't wait to show Rhett and see if he recognizes the song.

That is so great! I love the boys singing...cutest boys! Are they friends of yours? So fun to hear them singing the song we have been watching over and over. I can't wait to show Rhett and see if he recognizes the song.

THis is so funny. Guess what? I am from Czech Republic and I know this song. He is doing great job by the way.
Lenka from NH

I read while Micah naps. Which is why my house is a mess. I've lately been realizing that I haven't been "taking care" of my needs - i.e. having him sit on my lap during a haircut. It's hard to find that balance.

Oh - and I love the crying while singing. It just happens sometimes doesn't it? The love just hits you...

I've never commented, but have followed your story ever since Amy and Josh talked about your court problems and we prayed for you at housechurch.

Anyway, I lived in the Czech Republic for a while, and this video made my night!!

Also, I love your taste in music and your son is absolutely precious.