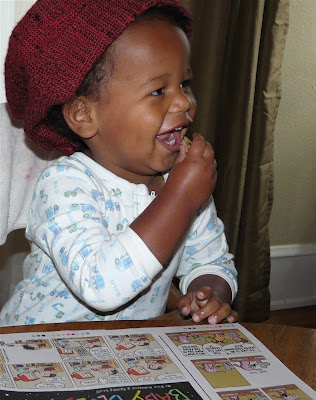 At dinner tonight, as Abe was slurping up long strands of pasta with his own fork, I looked at Ted and said, "When did he become a boy?" Abe is full-fledged, not even no longer a baby, but completely a boy.

As of a couple of weeks ago, we're in that stage when I need to start up a file on the computer where I can record all the things Abe says day by day. It all started a while back with the "I want some lotion" sentence. It's not only his speech though: his imagination and spark is shining through.

A few examples, off the top of my head, from the last couple of days:

Yesterday in the car on our way to the park to meet friends, this conversation happened:

"Mom? Daddy go?" (which translates to "Where did Daddy go?")

"At home, working with Obama."

"Really? He's working with Obama? What are they doing?" 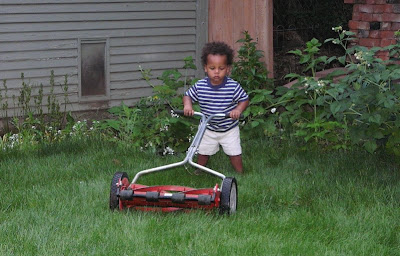 dreaming of mowing the lawn with the president
Later on, after playing with Rhett, Autumn, and Mezmur at the park, we're driving home and Abe, out of the blue, says, "Mom, I nee moe Aw-Aw" (translation: I need more Autumn).

Another "boy" trait is that he's taken to really reading the comics every day. He's been interested in the Sunday comics for a while now, but now he's a lot more focused on them and can tell you what's going on in the pictures. He also wants you to read them to him, and at the end of each one, he lets out a loud fake-laugh. 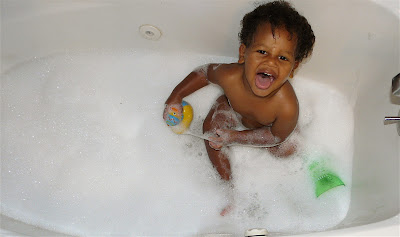 Dumping out the entire bottle of bubbles is hilarious!
Another "boy" trait: Abe has learned how to stall for time when he's thinking. When you ask Abe a question, about 50% of the time, he prefaces his answers with "um..." while wrinkling up one side of his face and squinting an eye. It's seriously adorable.

"Abe, what are you doing?" (after a suspiciously long stretch of quiet from the other room).

At night-time, we say our prayers, which is mainly saying "Thank you, God, for..." and then he fills in the blank with every person he knows and loves or has talked to recently.

He has learned the mesmerizing cause-effect of running after the cats. We're not happy about this one.

One fascinating development is how he's now reading along with me the books that I've been reading to him since he was a little baby. It's interesting to me that he knows, remembers, and can read along with books that I may not have read to him for months and months. If you ever wonder about the merit of reading books to infants, here's proof. They get it. They truly are sponges. Abe is articulating through speech knowledge he's had stored in his brain for weeks and months. Absolutely fascinating.

Lastly, and at huge risk of being "that mom" who brags too much (so ignore this part if it may be irritating), we think he's pretty much potty-trained. I'm not completely sure how it happened but it started about a month ago when he went #1 after his bath. Of course, there are still accidents if we don't remind him to go, but we use only 1-2 diapers a day, just for when he's sleeping. And for the last two days, he's stayed dry during his nap even. It's blowing my mind.

For some reason, he's been calling #2 "cookies." He's extremely interested, of course, in watching his cookies get sucked away by the plumbing. My best guess for why he calls them cookies must have something to do with his mother's baking ability. Poor kid, he's got the mom on the block who bakes cookies that look like poo.

I know I've said it before, but this may be my favorite age so far. It's simply so entertaining to see his imagination blossom, and Abe is actually maybe more affectionate and cuddly than ever before. I love how he nestles into my chest when we say night-time prayers and asks me, "Come, Mom! Sit on my yap!" so that I can go pretend to sit on his lap. When I do, he hugs me and pats both my arms. Best age so far. 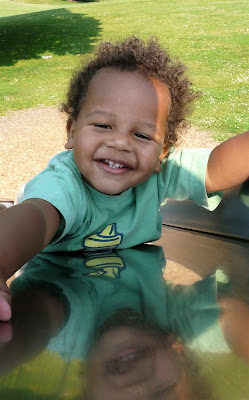 going down the big-boy, scary slide.
Posted by Lori at 8:04 PM

2 is definitely my fave age with jack, too. Terrible two's? Not here! I'm loving the personality and imagination coming out! So fun.

oh, those are such great stories! I love that he thinks Obama is working in your backyard (IS he??) Although I kind of squeaked out loud with the cuteness at 'sit on my yap'. It's too much!!

What a great smile to start the day. Abe is awesome!!

It IS such a great age!!! but, um, a little envious here w/ the potty training. We started, but the concept of anticipating is far far away...and so, we are back to the mishmash of options; potty, pullups, diapers. ack. You lucked out!

What a grin that sweet boy has!

Our little Abe growing up. Sniffle, sniffle. New shot for the Calendar!

Can I send Baby D to your house when potty training time comes?

This is fun to read. It 1-3 truly is the best age. I have an ongoing list that I keep in the girls' baby books of things they say.

My latest fav from Nora is when she was sitting on the toilet and we were talking about how when she uses the toilet she is just like her big sister. She then exclaims, "Our poopies can be friends!!" excited that her poo and her big sister's poo will live a happy life together down in the depths of the toilet. :)

Joy, Nora and Alivia's BFF poopies can go round up all of Abe's cookies for a big ole poopie-coookie picnic.

I need more Abe.
I get a lot of Abe's fake laughs...I guess I'm not as funny as I thought I was.

He is so precious!

Maybe he understands digestion and knows that his #2 used to be cookies? Also, check your e-mail, lady, because I'm about to send you one.

Abe sounds like the ctuest kid ever! I am loving this toddler age as well- Malak is getting to be more and more entertaining each day. I loooved him as a squishy little baby but I LOVE him as a sweet little guy who talk to me in broken sentences and makes me laugh all day long. How lucky are we to be mom's to such precious boys?!

This whole post just made me smile and sigh. Sweet Abe. I can't wait for Micah to start talking so I can hear what is going on in his mind. :)

oh it goes so fast doesn't it! What a little cutie he is!

Please keep "bragging" because I love to read about all of the things Abe says and does!
- Julie O.