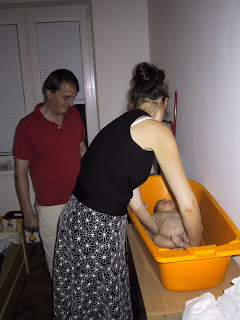 When I moved to Slovakia for the first time in 1998, one of the first friends I made was Joko, one of the computer teachers at the school where I was teaching. Early in the schoolyear, I noticed in the zborovna (staff room) that someone had just logged out of "pine," the very old-school (yet efficient) email software on the computer as "Agent Cooper." Being a Twin Peaks fan, I immediately wrote Joko to ask him who this account belonged to because I said that I knew I'd have an instant bond with a fellow Dale Cooper fan. He wrote back saying he was Agent Cooper and thus cemented our friendship. David Lynch brings all sorts of people together. 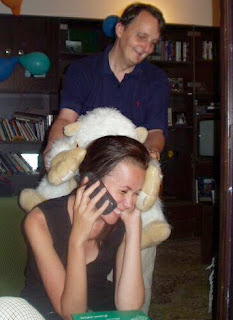 Joko and I are still friends, despite living thousands of miles away from each other. He's one of the truest, bluest friends I've ever had, completely and utterly dependable. That first year, I could always count on him to show up at my office a couple of times a week after classes were finished with an invitation to go downtown for zmrzlina (ice cream). And he'd occasionally humor me by going with me to Aj Vega, the local vegetarian place where he'd only order the oh-so-healthy vyprazany syr (fried cheese) with potatoes and tartar sauce. To this day, he avoids vegetables whenever possible.

We also discovered that we were both fans of the 80's, German pop ba 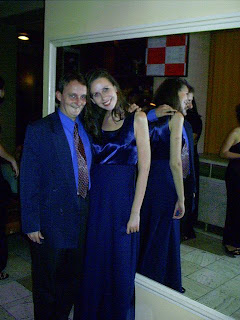 nd Alphaville, so when they came to Kosice, we went to the concert. And yes, we sang along to "Forever Young," which became "our" song, as cheesebally as it is, and which Joko would always request to have played at any school ples (dance) we went to. Here we are at Imatrikulacny ples back in 2002, I think.

I could write a book of funny stories about Joko, including interesting tidbits like a four-hour cab ride to Budapest, camping out on the Great Wall of China, my first time officially "tipsy" thanks to someone sneakily refilling my cup with becherovka while I wasn't watching, a couple of surprise parties, a frigid tour of Prague with the flu, and an interesting translation of the ice-show Mrazik in Spisska Nova Ves ("Are you cold?"--"What, are you asking me now or translating again?").

Suffice it to say, good people like Joko are the reason I love Slovakia as much as I do. My years there would have been completely different and much less interesting without his friendship and helpfulness to me the foreigner in his country.

Eventually we grew up and the carefree time of our '20s left us. Joko met a beautiful dentist named Silvia, and I met Ted. Joko and Silvia had a baby, and when Joko wrote me to ask if I'd be Marok's krstna mama (godmother), I cried, so beyond honored.

It's another long, odd, funny story for the book about Joko that I may eventually write, but the short end is that the Catholic Church in Slovakia wouldn't let me be official krstna mama. That summer, Ted and I were visiting Kosice, so we had a couple of meetings with Joko and a young priest
who Joko somehow hoped would overlook the fact that he wasn't Catholic, I wasn't Catholic, I wasn't Slovak, and that he didn't plan on raising Marok to be Catholic. It was fun to watch the varied expressions of bafflement on the priest's face as each of these facts came to light through the meeting.

So we ended that visit to Slovakia with my promise to be Unofficial American Krstna Mama to Marok, that when he grows up, he can come visit us and spend as much time with us as he wants. I hope he does.

Joko sent me this video this week of Marok taking his first steps, and it made me cry as I had all those thoughts about how fast time passes, growing up and becoming adults, and how it feels like yesterday that I was 23 and gallivanting around in what to me felt like an 'exotic' country with quirky locals. It was definitely weird to see Joko as a dad, but he's a proud, doting one, as you can see from the video.

Joko and I have tried to translate all the lyrics to this song, but it's too hard. The song is on the surface about learning to walk but speaks metaphorically (hence the difficulty to translate by us nonprofessionals) about how we are searching for our own personal ideals and Edens but get scraped knees in the process of learning to stand on our own feet and need the help of others. We'll be unaveny a sam (tired and alone) as we search to live to the fullest, trying to stand on our own legs and picking out the best bits from life's bonboniera (box of chocolates).

It's a lovely song with lovely ideas introduced by a lovely friend. Hope you enjoy:

Awww. That was great! Thanks for the awesome post, memories and the video. :)

That was very sweet.

Oh, so cute. Love the Frankenstein stagger when they are learning to walk.

Old friends are so precious.