The Richest Man in Town 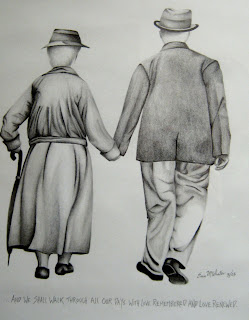 "...And we shall walk through all our days with love remembered and love renewed."
We had lunch today with a charming man, the father of Ted's high school girlfriend. Ted hadn't seen Mr. Miller in decades, and he came to our church Sunday just to find Ted. He lives with his wife in and is the chaplain of an assisted living home. His lovely wife has Lou Gehrigs Disease and can no longer walk or speak. You should see the light in her eyes though. That woman sparkles. The two of them have their own repertoire of signs to communicate with each other, and the love they have for each other is so apparent. The drawing here was done by one of their grandchildren and hangs outside the door to their apartment.

He reminds me a bit of my Grandaddy (who went on to heaven in 2001). I was riding in the car with Grandaddy one day when I was in college, and we saw Granny coming home on the same street. The two of them slowed down, rolled down their windows, and talked for a moment about the event that Granny was returning from. As Grandaddy and I drove away, he said, "Lori, your grandmother is the most beautiful woman God ever created." And that was that.

Mr. Miller used to be a traveling salesman. Some days were harder than others. He is blind in one eye, and has both one bad leg and one bad arm due to childhood polio. One evening at the end of a lean few days of meager sales, he expressed his weariness to his wife, even wondering if he should give up. She said that with their combined three eyes, three legs, and three arms, they should be alright. They were. In the few hours I've spent with them, I can see that these people have lived their lives well.

A friend was telling me today about the importance of surrounding ourselves with people who inspire us, who will challenge us to live better. She's right, and I feel lucky to have met the Millers.

Ted has been directing this fall a production of It's a Wonderful Life which is getting ready to open as I write this. Ted's playing piano for the "preshow" for the first few performances, so he was practicing this afternoon while I was looking through the script. I so love this story. The Actor's Co-Op did productions of the same show for the last two Christmases, both of which Ted was in, playing nine different roles including Mr. Potter and Uncle Billy. I saw several performances those two years and loved that moment during each show when the audience collectively gasped at Ted's first Mr. Potter line: it was dead-on Lionel Barrymore. I was proud of him. Each performance was such a cathartic experience for the audience (at least for me). I think people were not expecting to feel the same sentiment towards the play, yet you'd see the majority of people bawling by the end, probably even more than when watching the movie.

I got all teary reading the script today. That moment when Clarence says, "Strange isn't it? Each person's life touches so many other lives, and when he isn't around, he leaves an awful big hole, doesn't he?" gets me every time.

But the one line that makes my face scrunch up and my chest all achy more than any other, even as I type this, is Harry's toast to his brother George at the end:

To my big brother George: the richest man in town.
This is what was going on at the Rooney house today around 4:30, a woman crying over a script and a man in a suit banging away "Jingle Bells."

Okay, Ted is superly fun. I mean who knew he was so musical too??? Although, I'd like to see him playing the George Bailey character. I love that story too!

Lori,
I am Amy Breedlove's mom (we are the ones who live in Skopje, Macedonia). I check your blog often and read everything you write. I love the way that you write -- I feel like I know you even though we have never met.

Your remind me SOO much of a friend of mine who grew up in India and were directing a trades school in Burkina Faso, West Africa with us for almost 12 years. I would love to meet you some day.

I just wanted you to know that we are looking forward to your referral; and to say that we are thinking of you and Ted as you "wait" for your child to be with you.

All I can say is "wow". Not and excited, in your face kind of wow, but a sober wow. You have such a way of writing that can just grip a person. Thanks for sharing your lives with us.

Oh, you big baby! I say this only because I have yet to watch the ending of that movie without blubbering like a baby myself. Wish I could be there to see the play! Love, P

Carey, Ted thinks he's too "old" to play George Bailey. I disagree, but there you go. I now want to track down a clip of his Mr. Potter. It truly was remarkable. In the L.A. Times review of the show, the reviewer even commented on it, and I wasn't exaggerating the collective audience GASP. I have a talented man, for sure.

My name is Bethany....Totally just randomly ran across your page! YES SOMEONE ELSE FROM OUR AREA!! LOVE IT. We live in Keizer Oregon :-) Nice to meet you look forward to keeping up on your blog!