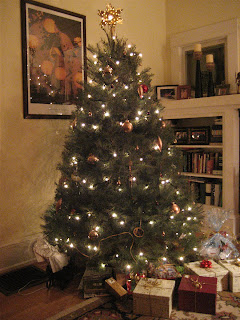 So what's been going on with the Rooneys since last week? For one thing, my brain keeps misfiring. I can't think of simple words sometimes, I forget to eat, and I've felt like I've been existing on some other plane of reality. I'm guessing (and hoping) this wears off as reality sets in?

One thing that has surprised me is how quickly I've felt myself attaching to these precious photos we have of baby Abenezer. I had somehow convinced myself that I could remain guarded until we passed our court date, but that was before I'd seen a photo of that wide-mouthed gummy smile! So, I'm a goner: completely ga-ga over this little guy. I even brought his framed photo to church yesterday to show anyone who'd expressed even a passing interest in our adoption plans.

We've had fun celebrating in various ways this week. We finished up wrapping our Christmas packages last night and have them all nestled under the tree. I opened up one early, a bumper sticker made by our friends Rusty and Carrie, which says,
"Life is like having a bumper sticker. You believe in something strongly for a short period of time and display it proudly. When you've moved on, the idea refuses to let go completely, leaving marks and stickiness where it once was, embarrassing you until you eventually just cover it up with something just as dumb, hoping no one notices the lumps underneath." Rusty and Carrie are my cleverest friends.
We've also been eating things like this: 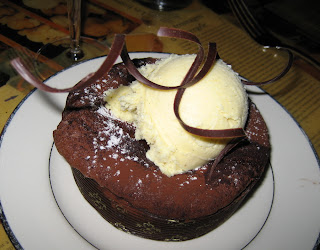 This one is called the "Queen of Sheba," so of course I had to order it. If you're ever in Portland, I highly recommend the shop Pix for dessert. 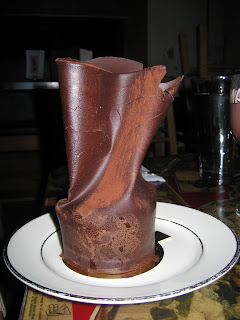 I didn't eat this one, but I thought it was really pretty anyway.

My friend Jana came to visit all the way from Slovakia, so we had fun showing her around Portland. Jana and I have been friends for ten years now. She likes to eat tortilla chips and salsa, even at breakfast: 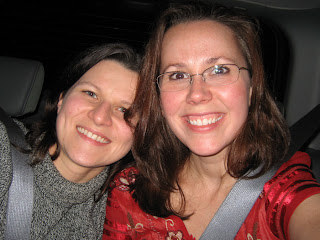 We took a walk with Jana up on NW 23rd, a.k.a. Yuppie-ville U.S.A., where we found this John Cleese t-shirt hanging in a window. This Wednesday it will be four years since Ted proposed to me by giving me this "Ministry of Silly Walks" t-shirt. He said that part of his calling in life was to have a ministry of silly walks and he asked me join him. There's more to it than that, of course, but it's a whole other long story. Suffice it to say, it was a very original proposal. So we got all sentimental when we saw it, even going so far as to kiss on the street. 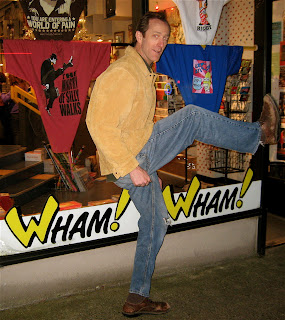 We've also had lots of time this week to visit with friends. We've never understood it when people say, "Oh, we'd love to get together but you know, with the busy holiday season, we may not be able to until January when things have calmed down." Huh? Isn't that what the holidays are for? To slow down and visit with friends? So here is Ted with one of his oldest--and I'd say best--friend Jim. 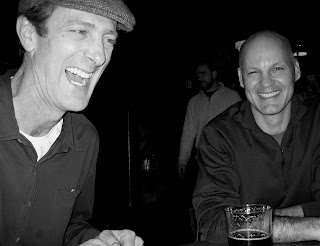 And here are some old friends of Ted's from high school. We got together with a group of them who are in town for the holidays, including one who is a genuine FBI Agent. You'd never know it to meet her: she seems pretty gentle in person, so I think it's pretty awesome to imagine her chasing down criminals with her pistol drawn. I put this picture here to point out the little photograph on the table. Anyone recognize that little face? 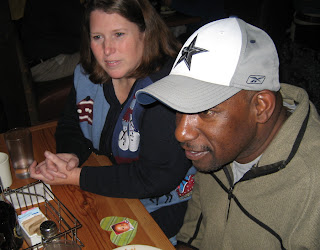 I'll leave you with a clip from one of my favorite Christmas movies. I hope you all have a blessed holiday, with lots of peace, joy, delicious treats, and some Christmas enthusiasm as displayed here:

well, he's the yummiest thing ever--of course you fell in love! seriously, i will state again that i'm sooooo happy for you guys---will be praying.

I know exactly what you mean about how you can fall for a picture. I really said I was going to protect this heart of mine with Pacey but it is already gone:-)I will never regret loving Payton either so keep on falling in love with that precious boy of yours!! I hope you find out a court date this week and I hope it is around mine!! How fun to be in Addis together!!

Sounds like you are head over heels in love. Enjoy it and know that there are plenty of prayers headed your way. I'll be sure to check on your little guy when I go to pick up my love bug in a few weeks. Merry Christmas.