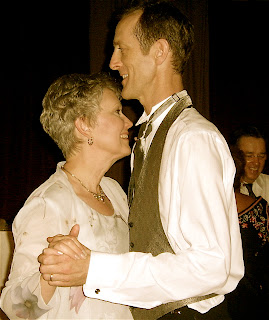 Ted has this habit of getting into the car, turning the ignition, putting the car in gear, and then clicking his seatbelt on after he's already started driving. When he does this, I tend to make the Marge Simpson sigh/growl, which he knows is his reminder that I prefer he not get killed or maimed in a car accident. He doesn't do it as much as he used to, and maybe after what happened this week to my mom, he'll remember even more.

My mom, seen here dancing with Ted at our wedding, came upon a wreck one morning this week on her early-morning drive to work. Cars ahead of her were swerving off to the shoulder to avoid the wreckage, so she did the same. Once she stopped, she saw that one young woman was standing outside her car next to the body of a man curled in fetal position on the side of the road.

My mom told my little brother to stay in the car (he rides to school with her) while she got out to check on the man. The paramedics had been called, but this man was in bad shape, and Momma said she couldn't just stand there and do nothing.

She's been a registered nurse for more than thirty years, so she knew what to do but felt frustrated by her lack of equipment. She'd had experience in trauma cases like this before, but only in an emergency room, not on the side of a freeway. She found that he had a pulse but his breathing was very labored. The young woman standing next to him had seen the accident and said that she counted ten times that the man bounced on the pavement before stopping. He'd not been wearing a seatbelt and had been thrown from the truck. Obviously, he was in bad shape.

So my mom weighed the options, and she knew that, despite her lack of gloves and anything sterile, she couldn't live with herself if she didn't at least help him breathe. So she said a prayer, asking God to protect her from the risk of contaminated blood and with her bare hands, cleared his air passageway. He took a deep breath then, but his pulse was weakening, and by this time firemen had arrived and could move him onto a board.

After they'd done this, my mom could see the full extent of his massive injuries and started doing chest compressions. She continued doing this while hearing the local news stations' helicopters flying overhead. (She told me today how angry she felt then, thinking 1. how intrusive this was to the injured man and his family and 2. how ridiculous it is that news stations have the money for helicopters but hospitals don't and that things could have gone much differently if a medical chopper could have whisked him away rather than having to wait for an ambulance to make its way through miles of stalled traffic).

The medics finally arrived, but quickly after getting him into the ambulance, they pronounced him dead. My mom turned and saw the same young woman standing there watching all of this, so she went to her, put her arm around her violently shaking shoulders and asked how she was. She had never seen someone die before. My mom then got back into her car and realized for the first time how cold she was--she'd not noticed until getting back into the heated car that it was only 32 degrees outside. She and my brother drove back home so that she could clean herself up.

I was so proud of my mother and get teary every time I think about what happened. Of all the people who could have happened so quickly upon this accident, my mom couldn't have been more perfect for that situation. Not only did she know exactly what to do, but she did it with compassion. Upon first feeling the man's pulse, she had a bystander go find some I.D. so that she could address him by name. She leaned next to him and spoke directly to him, calling him by name and letting him know that he wasn't alone. As awful as this accident was, it's also good that hopefully he knew that a caring someone was there with him in his final moments.

We were talking today about what happened, and one thing Momma said was that she was making sure from now on that she had a box of latex gloves in her car, plus a first aid kit and a blanket. We were also talking about the importance of more people having at least a basic understanding of CPR and first aid. She was telling me how simple it can actually be to keep someone alive in the crucial minutes it takes for help to arrive and how any average Joe could do it. Apparently most fire stations will give free classes on CPR if you can organize a group of people to come. This has inspired me to try to get one of these classes together in our neighborhood.

All this got me thinking about the practical side of being a good samaritan. It's not just having compassion and generosity, though those things are certainly important. If I have a giving heart, I should also have in my car things like a first aid kit, latex gloves, a small box of nonperishable food, a list of all the shelters in my area, a blanket to give to someone who is cold, an extra hat and coat too.

I'm not sure how to wrap this up except to say how proud I am to be my mother's daughter. She's been a hero to many, like the countless special needs foster kids she's taken care of through the years and the family whose father she gave one of her kidneys to (yes, you heard me right--she gave away her kidney, and she's a bone marrow donor too). This week, she rose once again to the occasion, being the comforting hands and voice to someone crossing over, to someone who would have died alone had she not been there to gently say his name.
Please wear your seatbelt.

Wow! That is one special woman...your mom. This made me teary. I had a similar situation happen...it stays with you forever. I will be praying for the young man's family tonight. I can't imagine being a young wife with a young son...and losing your husband. It is so important for people to wear their seat belts...it truly can be a the difference between surviving and accident or not. It is also so important that people be prepared...like you mentioned. Thanks for posting such an emotional and personal story...it could make the difference in someone's life.

What an amazing story. How wonderful that your mom is such an inspiration to you.

(P.S. We took CPR for infants & children before Micah came along and it makes me feel so much better knowing I'll know what to do if something horrible should happen.)

Your mom sounds wonderful. What an amazing person to be with that man in his last moments.

Now that... that is real life... the life most of us avoid. But if more people were like your mom... what a difference that would make in our world! Thank you, Lori's momma, for being real and brave and loving.

That's a very powerful story that takes me in a lot of different directions.Your mother did a wonderful thing and it sounds like she's done things like that many times before.

But for a 27 year old husband and father to have to go that way....

Lori,
I heard all about this accident. Thank God your Mama was there. I know it was a great comfort to his little family. I agree about the helicopter business. It's ridiculous and from what I heard it was right there in the waterworks curve next to all the hospitals in Jackson.
Take care.
Celia

When I was about 22, I was at my aunts house and my mom pulled up, came in the house and said there had just been an accident down the street. A car hit a light pole, and flipped over. The light pole was in 3 pieces. I'd had basic medical training and worked in the ER as a registration clerk so I grabbed the keys and went to the scene. My aunt lived in the country and I knew that while I may not be able to do much, I could definitely make it there before the ambulance. The driver was a young girl - probably mid to late 20's. She was in a tanktop and panties and she had been halfway thrown from the car. The car had a sunroof and she was half out of the sunroof, under the car, which was laying upside down on top of her. I crawled under the car as best I could and talked to her. She had a slight pulse and I heard her moan. When the medics got there they pronounced her dead and took their sweet time using air lift pads to lift the car off of her. I told them over and over she had a pulse just minutes ago and I heard her moan. They did nothing.

Since then I've kept my AED First Aid/CPR updated regulary. I've also taken a FEMA certified class given by the Red Cross and am a Certified Emergency Responder - anyone can take this course and in most cases it's free. I highly recommend it. They teach you first aid/crp, proper search and rescue techniques, fire safety and much more! I keep a bag in my trunk with a bright green reflective vest, gloves, first aid kit, flashlight and more..

The worse part of all that - aside from knowing that there was someone dying and nothing I could do was that the victim's husband knew my mom - and it turns out they had been in a fight and he left - she jumped in her car to follow him. When he found out I had been at the scene every time he saw me he asked...Do you think she suffered? Do you think she passed quickly.. He also thanked me for going to the scene and for being there.. but I'll never forget that event as long as I live. I had a small breakdown that night after the accident. Every time I closed my eyes I saw her.

So tell your mom for me that she is not only an incredible woman, but in my eyes she is most definitely not only an angel but a hero. There are so many people that simply drive by an accident - thinking - well maybe someone ELSE will stop and help before the ambulance gets there... While your mom may have not been able to help save that man's life, being there with him and the simple act of kindness she showed - talking to him made a world of difference.

Bravisimo to your mom! Thank you for sharing her heroic story with us.

How I wish the ending could have been different for the victim. Such pure sadness. May none of us forget the lesson he taught.... And may his family find strength and love around all those dark corners they are surely discovering.

I'm proud to be your mother's son-in-law. And I vow to have my seat belt fastened before the wheels are moving...and if I don't you may bring on the Marge. I deserve it. :-)