This was a tangled mass of a day spent with my niece, just the two of us. Once it was decided that she was coming to New York, the first thing she mentioned wanting to do was visit the Museum of Modern Art. We chose what must have been the busiest day of the entire year to go. It's difficult to get a decent look at the art when you're standing shoulder to shoulder with a few thousand other people. After three floors (out of six), we gave up and left. 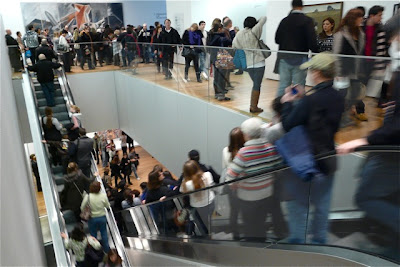 The tangled mass at Moma. To the right is "Christina's World," a favorite of mine, but competing to get a glimpse was sort of a drag.
On the subject of art museums: what is the compulsion we have to take personal photos of famous works of art? I really don't get it. Sure, take a photo of yourself next to the work as a brush with greatness moment, but this scene is completely baffling to me: 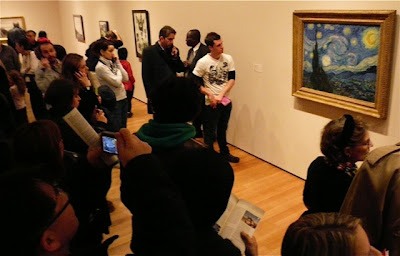 My guess is that at least half of these people, at some point, had their cameras out to take a photo of "Starry Night."
We left the museum to wander the tangled mass of streets and people in Chinatown and Little Italy. I'm fascinated with all of New York, but this area is high up on my list, along with the Lower East Side where all the immigrants first landed and made their dwelling, hoping to move upward, literally and figuratively. I'm dying to read this book, which I will gladly accept as a late birthday gift, in case you forgot. We found the Tenement Museum, whose tours were sold out. I'm saving it for another day. 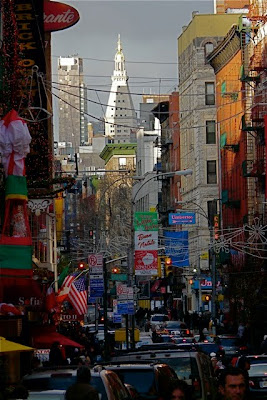 We ended up eating very bland Italian food on Mulberry Street (word to the wise: don't eat down here, head to Greenwich Village for good Italian), but I still enjoyed the moment of sitting in Little Italy with my niece, talking about her school and friends.

We finished this tangled mass of a day by going shopping on our way home, at one of the most crowded H&Ms in the city. Then we fought through the crowds at Madison Square Garden to get home. Once home, we relished in space, free space and quiet, a very hot commodity in New York City.
Posted by Lori at 6:23 PM

you are one cool aunt lori.

People taking pictures of virtually everything and anything baffles me too - especially if the picture is in a glass frame!! That's a lesson into human psyche alright.

I can sense the spirit of New York in me as I read your lines - thank you for sharing.

And Happy New Year to you and your loved ones.