We Believe in Fairies.

We took Abe last night to see a children's production of the Broadway version of Peter Pan. Our neighbor's 18-year-old son was playing Captain Hook. We weren't sure how Abe would do for a long show like this but the experience has to rank up there in our top five best experiences as parents thus far. 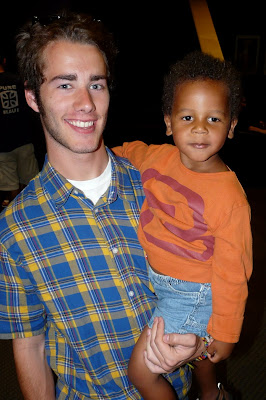 Our neighbor who played Captain Hook, post-show sans costume.
Ever since Abe was pretty small (under age two even), he would sit quietly, hands clasped on his lap, to hear a story. The story could be a book, play, or puppet show. His imagination simply took him there to that place where the story was happening. You can see the concentration in his face. This happened last night during Peter Pan, from the moment the curtain rose. Abe sat transfixed for two hours. He would ask us questions along the way about what was going on but he rarely took his eyes off the action on stage.

During the curtain call at the end, the girl playing Peter took her applause by flying over the crowd in her harness, sprinkling fairy dust over everyone. She was directly above us, so Abe got a head-full of glitter. All during the play, Ted and I kept looking at Abe then over at each other, astounded at the quality and heart of the show. Then we'd look down at Abe, his eyes lit up, mouth slightly open, bewitched by theater. We'd look again at each other, shake our heads, get misty-eyed. I was choking back tears through the whole thing.

This is why people want to be parents. We want to experience our childhoods again through our sons and daughters. We want the joy of watching them discover stories and truths that we discovered at their age. We want to watch them come to love things that we love too. Fantasy, fairies, boys who can fly, pirates and Indians, dance, music, light, staying up too late, crocodiles who go 'tick tock', happy thoughts, adventure, sacrifice, transcendence, friendship, magic.

I had the hardest time fighting back the tears when the audience clapped to bring Tinkerbell back to life after she drank the poison meant for Peter. Peter plead with us to believe, to clap, to let our imaginations breathe life. It did. Abe may have clapped the hardest.

After the show, the cast came out to mingle with the audience. Abe very much wanted to meet Wendy. He wanted to meet everyone. He told them all "good job," and then asked them nonstop questions. Since turning three, Abe has entered a shy period around new people. He will often tuck his head into our legs, not wanting to talk. But not last night. We were amazed at how chatty he was with these young actors. He wanted to track all of them down and talk to them. When he wasn't with an actor, he was telling us and our neighbors about his favorite parts of the show, tiny details that even we had maybe overlooked or forgotten about, like the harness that at one point was hanging down too low: as Abe kept saying, "That rope escaped."

Though it was very late, he still talked nonstop the entire way home. If Ted and I started talking to each other, he'd say, "Momanddad, please stop talking. Now, Dad? Tell me something else about Wendy." After the very late night last night, he slept until almost 11 and woke up telling me that he dreamed about Peter Pan. I'm glad. I hope he has many dreams about Never Never Land. I had no idea going into parenthood how fun it would be to relive my own childhood. This may be the biggest surprise to me about being a mom: the aching swell in my chest every time I see Abe find joy in something that I also loved as a child. There is nothing else like it.

Whole worlds are opening up for our son, and we get to watch it. My son's face is the best theater I've ever seen. 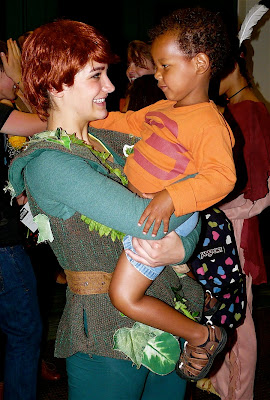 The star of last night's show with the small star of our house.
Posted by Lori at 2:01 PM

I love this post, Lori. I saw Peter Pan when I was young and had dreams for months of being onstage as Wendy and getting to fly. Love that you're reliving your childhood through Abe's discovery and wonder...

truth be told, I'm straight up emotional lately. anything regarding children and their child-like wonder gets me. I love theater. and I love kids. and I hope I can experience those two loves someday in a night as magical as this sounds.

This is such a sweet post. Just reading it and envisioning your evening with Abe made me feel as though I was reliving my childhood as well. Parenthood is fun.

I love it! I would have cried. I cried when we took Rhett to the Cirque, but Peter Pan...I would have been bawling.

And, I totally don't mean this in a creepy-older-woman way, just in a concerned parent way, but am I imagining things or is that friend of yours just ridiculously good looking?

Wonderful post, Lori!!! So true what you write about experiencing our own childhood through our children!

What a night! Savor, treasure....and once more a confirmation that Abe is the PERFECT kid for you guys! Beautiful

I love abe stories. they brighten my day :)

Ohhh, this takes me back. Peter Pan. What a fun story and I am sure it's even more meaningful as an adult, not to mention as an adult watching your child enjoy the tale. Thanks for sharing this! Abe is just so stinkin' cute =)

"I had the hardest time fighting back the tears when the audience clapped to bring Tinkerbell back to life after she drank the poison meant for Peter. Peter plead with us to believe, to clap, to let our imaginations breathe life. It did.
Abe may have clapped the hardest."

Oh thank you for sharing this. It is beautiful.

aw, what a wonderful post. I was seriously sniffling big time.

Living in an apartment building packed with children, I often see all the not-so-great things about kids. I will hear them shrieking from behind closed doors and stomping above my head. I see them pouting and complaining with their exhausted mothers. I see them in strollers taking up space.

Thank you for making me see children as incredible beings that are moving and precious.

Lori...I'm so glad you shared this with me. You know how much I love theater, and sharing the experience with my "kids" is what keeps me doing what I do. It truly is magic...whether it's Peter Pan (which I want to direct so badly, but getting the $5000 for the flying equipment is a bit out of our league) or Les Miserables with high school kids..it's just magic!! I'm so glad he loves it...