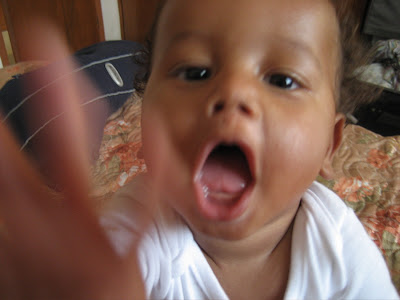 I think we have an actor on our hands. Abe is the master of funny faces, catching up quick with his dad. Every night from about 7-9, he rolls around, kicks, moves constantly, squeals, laughs, coohs, and makes hilarious faces. His most recent I don't have a photo of yet: when I kiss him, he squinches up every muscle in his face, rolling his eyes back in his head, and smiles the biggest gummy smile you've seen. 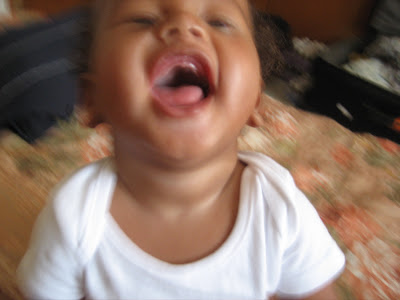 We haven't slept so good in ages ironically. We're all asleep between 9 and 10. He doesn't wake up for the next 9-10 hours. This morning we were sort of nudging him at 8 am. He wakes up smiling. 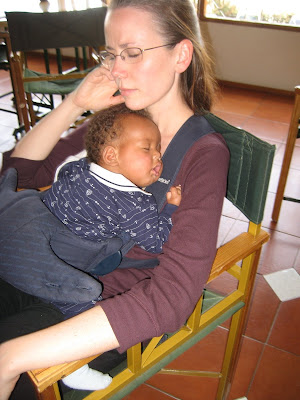 I've been trying to write down impressions of all we've been experiencing here, which I'll post later after we get home. 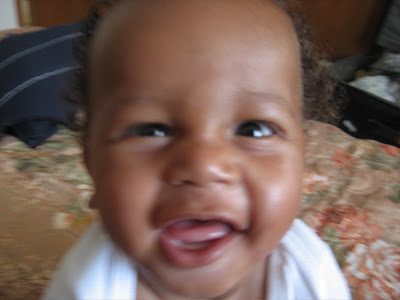 A couple of things: The ladies at the Gladney foster home are just as wonderful as we imagined. Yesterday during the coffee ceremony one of his favorite caregivers came in to give him a gift she'd bought for him. As I went to grab the camera to get a photo of them together, I realized that she was crying and crying, trying to hide her face, emotional that this boy she loves is going away. It got me. I put the camera away and gave them their moment together.

About the Ayat House: I'll write more about it later, but Ted pointed out that, as much as we like it, there are some things that may bother some people, like the dogs barking for a couple of hours at night (we use earplugs) and having to turn the hot water heater on every morning. Just little things like that that some people may not like. We think it's all awesome though. 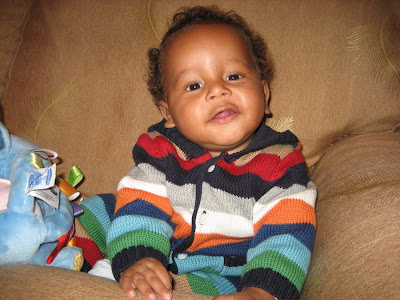 More later...Abe's being squirrelly sitting here at the internet cafe...
Posted by Lori at 10:24 AM

He's about the cutest thing I've ever seen! I'm so stinkin excited for you! I'd love to meet the little guy when y'all make it back to Pearl!
Celia

OH OH OH. I was expecting to see the pic of "Lori meets Abe," sure you didn't have time to post with that whole ethiopian dial up. I'm thrilled to see the post yea! (now gotta read)

I love the pic of mom and son dozing. I'm itching itching for your return.

HEEHEEHEEE!!!! All of this just makes me giddy with happiness!!! YAY!!!

I love the comment about how you are all finally sleeping well. What a blessed relief to finally have your family all together!

He couldn't be any cuter. You are so blessed. Savor every moment.

My hearts melting as we speak....

Or rather, my heart's melting as we speak (I wish we could edit comments!!)....

Such an adorably cute boy!

what a little beef-cake! So cute!

He's absolutely precious! Oh, how glorious - being a Rooney, so in love with each other!

What a great pictures of that little cut up. Boy, is he going to give you some laughs over the next...ummm...50 or 60 years :) He is a little goof ball. What fun!! I love seeing the picture of you together. That is what we blog buddies have been waiting for...the pictures of you three finally together as a family. That was touching about Abe's caregiver. That is how Nathan's was as well. It just really gives you understanding to how much they bond with these babies of ours. Can't wait for you to get home so I can talk to you in person :)

Lori,
Love the pic of you and Abe asleep. You two are a perfect fit!
Love you THREE!!
CindyC

Oh these are the best pics!!! he is simply adorable and you look so great with him. You are going to have such a fun life together. He's going to keep you laughing. How much does he weigh? HE looks so good, it's a testament to the Gladney home and it's wonderful to hear about his caregiver, even as it brings pangs. He is beautiful, we are so happy for you! Michele G

Love the update Lori! He is a sweet little adorable face!

The picture of you two is sweet... Bonding with his mama while he snuggles in for a rest..

LOVE the one of him snuggled up on your chest. he looks so comfy and safe. It's really wild to see these pictures of you guys with him when he's been such an idea for so long, and now he's real and in your life.

i'm dying for you guys to get home so i can have my turn holding him. he really is ridiculously cute.

I love the picture of him sleeping on your chest....he looks very cozy with his mom!
Thanks for the updates

Lori - you have that new mama glow for sure! Abe is a cutie! I love how he is fitting right in with his mom and dad!

What a little ham! Too cute!

aunt lori,this is lauren bonham he is the cutest baby ever! can't wait to see him!

Yep, I think Ted may have met his match in the goofy face department. Love that.

So, so sweet. Tsebay, Kozette and I have been checking in. The girls love little Abe and we are so happy you are all together.

He is so incredibly sweet-and as a knitter, that little stripey sweater outfit is SOOOOOO adorable I cannot stand it! ok, it MAY have something to do w/ the cutie wearing it perhaps....I love the pictures and stories-thanks for sharing your life with us online blog buddies :)

What a doll that little Abe is!
Kerri and Ruby

Daddy better watch out, he is going to be out of work soon when your little comedian gets home:-) He looks so happy and so do you!! I am just so excited for you...now come home!! I want to talk!!

He's just too precious for words! We can't wait to meet him!!!

Thank you Thank you Thank you for the news! I am so thankful to see pictures that you are taking of him and the first impressions you are having with him. What a doll. He certainly is full of character! I simply cannot wait to meet him. I'm so excited I could just scream! You are right he is tiny. He looks so small in your arms Lori. You already are the picture of a mother. It will be such a blast being a mommy with you now! Can't wait to hand off hugs and kisses to you three!!!
Love you,
Melissa

He is so precious! I love the pictures and just feel such a sense of calm and relief seeing that beautiful boy in your arms. Have a wonderful rest of your trip and a safe trip home. We're thinking of you!

He is such a doll. You must be on cloud nine! Congrats!

Trying to type with tears in my eyes...So beautiful to see your beautiful boy snuggling on his mom. We are absolutely thrilled for you guys.

What a delight. I'm so pleased things are going so well, and clearly you've got the most delicious little boy ever.

Little Abe is super delicious!!! I am so happy for you guys...give him a squeeze for us!!

He's so handsome and I'm so happy for you guys! Safe travels home!
Renee