Until a few days ago, Ted was home six days in six weeks. Work stuff. Necessary. I didn't want to complain (um, at least here, but boy did a few gracious friends and neighbors hear about it). But after about four weeks, it started to get really hard. My patience was wearing thin with the almost-3-year-old living upstairs. We were officially really tired of each other. I may have, just maybe, at one point, while in the car, in response to my son's loud exclamations of "huh?!" simply because he knows it gets on my nerves, raised my voice to what some might say just may have pushed my volume level into the category of "yell." I think it was something like, "Just. Stop. Talking. NOW!"

I immediately felt guilty. And I mean, bad guilty. Like wanting to pull over on the side of the freeway and apologize guilty. Except that Abe didn't completely stop with the yelled, "huh?!"s. He just whispered them, which continued to annoy me. I apologized when we got home. So did he.

But I was still frazzled, coming apart at the seams, as they say. I felt like a weakling. I kept reminding myself of all the military families whose spouses are in harm's way for months at a time, with limited communication. One of those couples was at church Sunday, and I joined the standing ovation when he was recognized, tears welling up in my eyes whenever I see a soldier come home. At least my spouse was just one state away and available by phone and skype all day long. I felt like a sissy for wanting to crumble under the "demands" of one measly preschooler. So many have it harder. 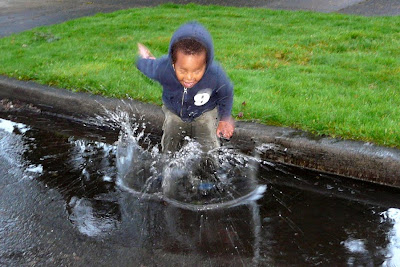 Abe forgives easily. Though he'll probably still yell "huh?!" at you thousands of times in the car.
One night last week, before Ted got home, after I'd put Abe to bed, I sat at my computer with wine and hulu. I watched an episode of Parenthood. One of the characters missed out on the first five years of his son's life. In this one scene, the mother of his son sits him down on her couch and shows him the video of their son's birth. His eyes widen, amazed. He slowly smiles, not able to take his eyes off the screen. His eyes fill with tears.

My eyes widened. I couldn't take them from the screen either. The river rushed forth, down to my chest. I was suddenly filled with gratitude for so many things. Euphoria came bounding through my front door.

I wrote through the sobbing, something incoherent to Ted, edited a little bit here:

"And I stay up too late at night and think about my friends and my former students and my love for them, all these people in my life, like neighbors who stop by to test the cookies I'd made as a thank-you gift for the Ethiopian wife who stayed up all night making food for people she'd never met...and I'm overcome. The dam has broken, man. I'm sobbing now. My life is so blessed. It really is. What is going on? Just sitting here thinking about my life and the places I've been and the people I've been able to know and who bother to stay in touch with me, and I feel so full and so lucky and simply overcome with the love of the people in my life, my neighbors, my friends, people very far away who I may never see again...and yep, more tears at THAT thought: all my friends I may not see again. When will I see them again?

Our daughter too, someone alive and yet to meet. And my heart is so huge and breaking and filled with these people that have simply broken me for my love for them. Such beautiful people in this world I know, who I love so. And when will we meet again? When?

I am overcome. My current life is a tedium of minutia yet I dream of big things and through it all I'm so thankful. And tearful. And really snotty."

This was a week ago today. Thursday, Ted came home. In the nick of time, I think, bearing coconut from a work-trip to Hawaii.

First of all, I could live off of coconut water! Oh, how I miss it.

Secondly, can I say yes, yes and yes to your post? My three year old drives me up a wall and yet there are those moments where I am filled to overflowing with gratefulness for him, his little brother and life.

Glad Ted is back!

this video of abe is beyond sweet. love him holding his ears because of the sound and his calmness when drinking something new. he's so matter of fact.

i do not have a clue how single parents do it, nor do i get how military spouses survive. it's beyond understanding.

i get your frustration. he's at a hard age. pretty soon you'll have sibling fighting to add to your stress. :)

Oh Lori, how I wish you lived next door.

My husband is coaching track. I know this does not compare to military wives, but still, he is quite unavailable. I feel it, girl.

First off, I think you're a saint for only yelling once that whole time. I've been solo for only 9 days and I think I raised my voice day 1. And omg, the guilt. And the apologies. And the thoughts I've ruined my son for life.

Your words, once again, have overwhelmed me. So beautiful. Thank you, Lori.

that video is so flipping cute! and your words were awesome. good things to remember. stop making me cry at work :P

Me too with the love of you. And I love the email.

Lori...it's all just part of being a mom and luckily they forgive us...that's what's great about kids..their loving and want to love us. So happy to see you on the wait list and even more excited to see a girl between 4-5. Maryn was just a little over 4 when we brought her home and I thought it was just the perfect age, old enough to understand what's going on and able to communicate but young enough to be able to transition easily (for us at least). Hope the wait is peaceful! Love to all of you!
Renee

oh how i love this post. and wish i lived closer. and the yelling. yes. awful. but the apologizing is so important. he too will yell and now he'll know how to apologize. also there is no such thing as a measly three year old. they are a FORSE. my god they are. they are LIFE and we are life. age has put us in lower case. it's not balanced.

so true, the weeping and the loveliness.

Yancey is coming home tomorrow after one week away AND my mother was here for almost the whole time...and yet our entire life has tipped and everything just fallen over. I cannot image longer than a week. no. i hope i never have to.

Lori, I love reading your blog! As an Army wife I'll tell you that being apart from my husband for long periods of time SUCKS, but sometimes I think the shorter absences, here and there, are harder.

At least I can get us into a routine that becomes "normal". When Daddy is gone on short trainings or assignments it's way more disruptive. I feel you, sister!

ps - My 2 year old repeats everything over and over until I acknowledge it. And each repetition gets louder and louder...you get my point. ;)

Absolutely gorgeous post. Made me all teary. This fight is the hardest. Waiting for the children that will be ours seems to cause endless amounts of deep thinking and gratefulness for others and thier fight with us. Love this post. Love you all. Next time I'm in Oregon we need to meet. Especially that little Abe Rooney. :) Precious boy.