A quiet few hours at home by myself. Who knew? A friend invited Abe this morning to go with them to the zoo. I asked if he wanted to go. Yes. "I'll miss you, Mom, but I don't want you to go. I will miss you though." Then we snuggled more, determined not to get out of bed until the sun was sufficiently high enough in the sky to warrant the day a lazy one.

The need for some quiet hours is great. It's been a busy couple of weeks. Ted was working in New York, with his shoot dates getting changed left and right. Finally, he told them that they either fly him home or fly us out there. So a week ago yesterday, Abe and I got a free trip to New York City, one of my favorite places. 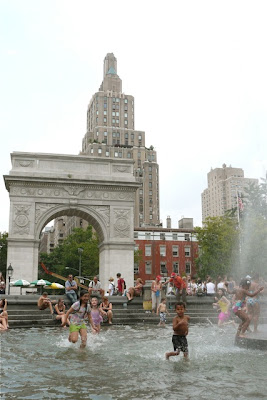 It was really hot. We did a lot of this.
I should have written my daily post about the city like I did in 2009 when we were there for a month, but alas, our ibook was being repaired, and our only internet access involved sharing Ted's iphone. So. Some highlights.

1. Cranky, hot, sticky, irritable thanks to traveling from The Strand bookstore up to Central Park with a boy who was bouncing with excitement at getting to be with three other little boys, all on a city bus. A deflating phone conversation with our caseworker while walking through the park. Arriving to our meet-up location and telling this lady how pissy and deflated I felt about our daughter not being with us yet. But then: a dad appeared, handed me a paper cup of white wine from a bag and took my son and his son rock climbing, and suddenly I felt lifted again. 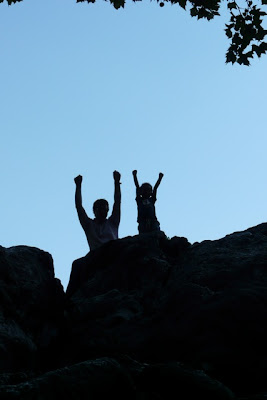 We met the pied piper, and he took my son rock climbing in the park.
2. My son and I climbed atop a rock and made a pretend campfire with roasted marshmallows while a group to the south of us did yoga. A man with a small dog walked by, and I asked him how to get to the Alice in Wonderland statue. He climbed up the rock, sat down right next to me, pulled out his phone while letting Abe pet his dog, and showed me where we were and how to get to Alice. We chatted a while. He was lovely, as most New Yorkers are. This is why I love this city. Native New Yorkers are some of the best people in this country. Don't believe what you hear about them being rude; they're just in a hurry. Ask them for help, and they'll do it. This post by one of the folks I got to meet earlier that day explains what I mean. 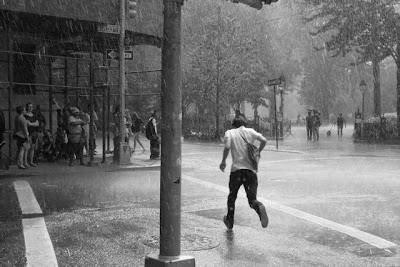 Summertime downpours make everyone slow down. Or really speed up.
3. I had to get re-fingerprinted, so early one morning while Ted was working, Abe and I took a cab down to the CIS support center, and more of these incredibly helpful New Yorkers got me in and out of this appointment in ten minutes. Then we took the subway down to the Staten Island Ferry to look at the Statue of Liberty. A Jewish tour guide and board member of his synagogue chatted with me the whole way back about why he's nonobservant yet so committed to preserving his heritage in this city. We also talked about the wonder of Voo-doo donuts while Abe snoozed on my lap.

4. We got to watch Abe fall in love for the first time. She is ten, has long curly hair that she pulls up into a top-knot most of the time, and eyelashes so thick it looks like she's wearing mascara. She's lovely, sweet, kind and gentle (except when her big brother is tackling her), and has a slight Australian accent picked up from her parents, old friends of Ted's from his years in the city.

We walked through the park with her on Sunday afternoon after having lunch with her family. The next day, we climbed onto the roof of her building with the other party guests to watch the fireworks over the Hudson River. The next morning, Abe opened his eyes and said, "Mom? Do you think we might run into her today?" The following day, he was more direct: "Can we please go see her today?" We did. They jumped on a balcony trampoline, and her big brother gave Abe his Yankees cap, showing him how to wear it backwards while making the "V for victory" sign. On our way back to the apartment, Abe laid down on the sidewalk outside of Penn Station, thumb in his mouth, tired and lovesick, and I gave up on trying to keep him clean in this city. 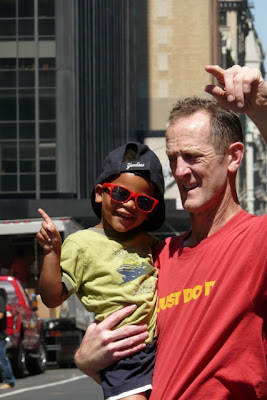 Hat backwards, sunglasses on, lesson in hailing a cab.
5. I was sitting on the 14th Street subway platform waiting for the train. I notice what I think is a tiny bird landing softly on my hand and jumping onto my knee. It wasn't a bird. It was a cockroach. I jumped up, freaking out, and a nice Greek man squished it. His nice Greek wife gave me hand sanitizer, and I couldn't stop shuddering for the next hour or so. Cockroaches on the subway are a rite of passage for New Yorkers, I hear. I was jumpy the rest of the trip.

6. My college roommate lives in Brooklyn, and I love being able to see her when we're there. We went over ten years without any contact, but now we've seen each other twice in the last year and a half. She showed Abe where to look for rats on the subway tracks. Her husband took us to his office at the google headquarters, and we played for a few hours with leggos and huge exercise balls and massage chairs and fusball tables, and pool tables and wii games. She calls it "preschool for grown-ups." Absolutely. They also have delicious snacks and stock Stumptown coffee in the espresso machines. 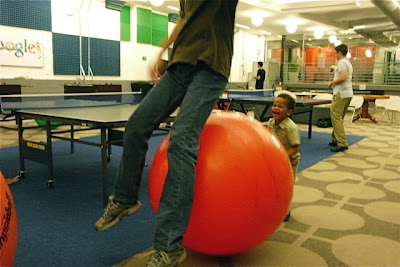 Google rocks.
7. Our last full day in town, Ted was working so it was me and Abe chasing public fountains and air conditioning. Word to the wise: if you're ever in the city by yourself with a four-year-old in 90 degree heat, take the time to take frequent rests or else you might find yourself crouched down on the sidewalk fussing at your kid as he sits in a time-out while leaning against the Chrysler Building as hundreds of people rush past you. 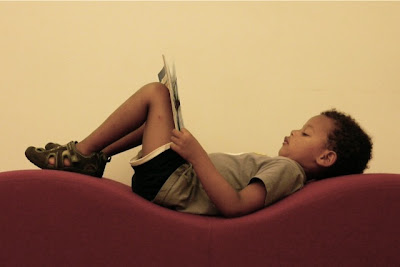 The children's room at the New York Central Library is a nice place to cool off after said meltdown in midtown.
8. At the end of our first full day of Mom and Abe time, we needed food so stopped by the Five Guys Burgers right down the street from our place. A big guy in line ahead of us let me go first because he said he always lets beautiful women go ahead of him, and I felt verklempt and happy because seriously: I was sweaty and sticky and grouchy and needed that.

9. My favorite thing about this short trip was our nightly ritual. We'd come in at the end of the day, heads and hearts full of the wonder of this amazing city. We'd be sweaty and gross. Shower Abe off and watch the brown water run down the drain. Shower ourselves off and open a bottle of cold white wine. While Abe watched Ratatouille every night, we sat outside on the huge terrace of the place we were staying (which belonged to some old friends of Ted's who are only there part-time). Recommended New York City activity: have a glass of wine and climb onto the roof. This was our terrace table, chairs, wine, lantern.
This was my first time staying in a legitimate "penthouse," and I felt fancy. There was something so wonderful about the feeling of being clean at the end of a sweaty day, a glass of chilled wine in my hand, letting my hair dry in the warm night air, the hum of a thousand air conditioners around us (just not at our place), staring at the lit windows of other apartments and wondering what those people were doing, listening to Ted practice his Irish accent for his job, thankful for this trip, this free summer vacation to one of my favorite places. 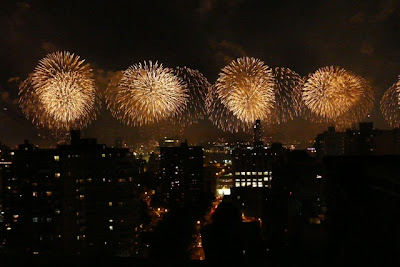 Fourth of July fireworks over Manhattan.
Posted by Lori at 12:23 PM

Wow! What a great trip.

I'm so glad you were able to take this much needed vacation. Sounds like you had a great time. I love the shot you took of the rain.

Your pictures are fabulous and your trip sounds amazing. I heart NYC too. I just loved reading this post and am so happy that your sweet family had a change of pace for a little while. And then at the end of it my eyes fell upon your previous post with little Bee's beautiful smiling face and it made me tear up. Soon, soon, soon. We too are in the "home stretch" waiting for embassy clearance, and I hate how much harder the waiting is at the end, yet love it because it means we are almosthere. Hugs.

I love love love this post. I love you and Abe. I love the city. I have NEVER had in a cockroach fall on me in my 20 years here - oh goodness, I'm sorry about that one! I love the man with his dog!

Loved seeing the two of you, however briefly.

Praying that you are all home together very soon.

I loved meeting you and Abe. His smile is infectious and all the kids were so hysterically funny on the bus. Thinking of you every day, wanting your family to be joined together.

hi lori!
glad you had a lovely time...
glad to know that ted is practicing his irish accent (the best in the world, i think),
and glad to know that abe has public meltdowns too. we've spent a lot of time leaning against big buildings in time-out lately. sigh.
sending up lots of prayers for you. every day.
love,
becca