"Each night when the moon appeared in the sky, I would lie on the ground outside and quietly watch it. I wanted to find out why it was so appealing and likable. I became fascinated with the different shapes that I saw inside the moon. Some nights I saw the head of a man. He had a medium beard and wore a sailor's hat. Other times I saw a man with an ax chopping wood, and sometimes a woman cradling a baby at her breast. Whenever I get a chance to observe the moon now, I still see those same images I saw when I was six, and it pleases me to know that that part of my childhood is still embedded in me." -- Ishmael Beah, in A Long Way Gone: Memiors of a Boy Soldier

Ismael Beah has an unmistakable face. I had traveled from Portland to Denver and rushed like crazy to catch the 20 minute flight to Aspen. I was one of the last people to board the plane, and in spite of feeling rushed and out of breath, my heart rate only picked up more when I looked across the aisle and saw Ishmael Beah. I had a back-and-forth dialogue in my head about whether or not it was actually him. What would Ishmael Beah be doing on this tiny plane to Aspen? But I just knew it was him.

I settled in, clicked my seatbelt, and sent a couple of texts (to Ted and Julie), both saying the same thing, "I'm almost positive Ishmael Beah is sitting across the aisle from me on this flight." I turned off my phone and finally worked up enough courage to lightly tap his arm to ask if he was who I thought he was. He said yes, and I introduced myself, telling him that I had recently read his book.

He asked me the standard fellow-traveler questions of "Where do you live?" and "Why are you going to Aspen?" and then turned back. I knew I couldn't engage him in a conversation since he was sitting across the aisle, one row up from me. It would have been awkward and not at all private. So I wrote him a long note on one of the pages of the airline magazine, telling him how I keep his book on my living room mantle as a reminder of what is important in life and hopefully to get others to read it. And I told him that, as the mother of an African son, I hope one day that Abe will know his story and see him as a model of bravery. I thanked him for telling his story and asked him if he would sign his autograph for me once we landed. He slowly read the note, folded it neatly, put it in his back pocket. He then turned around, smiled, nodded and said, "Sure."

When we landed, he quietly gathered his carry-on and walked off the plane, waiting for me on the tarmac. He greeted me with a large smile as I caught up with him, just like the smile on the back cover of the book. The sun was shining brightly on his face. He just kept smiling, and I thought to myself that I'd rarely ever seen a face with such purity. I pulled my black moleskin notebook out of my bag and showed him also a photo our son, which he smiled at widely. He clarified how to spell Abe's name. Then he wrote something that I didn't read until a few hours later.
I pulled the notebook back out after Courtney and I had eaten dinner, eager to see his autograph and find out what he'd written, "Abe, be like the moon, always. Ishmael Beah."
One of Abe's first words was "moon," and he's been pretty obsessed with anything moon-related since he was a tiny boy. I could tell babysitters that one sure-fire way to calm him is to take him outside and have him find the moon. Even if it's a tiny sliver in a still-blue daytime sky, he can find it. One of his favorite songs as well is "Catch the Moon," by Elizabeth Mitchell and Lisa Loeb. He regularly calls out to the moon, "Hey moon! You come here!" as he waves his hands. Maybe Ishmael Beah writes this message to every person who asks for his autograph, but I think it's nonetheless a special message for our moon-loving son. Having this brave young man write a note for my African son as I was on my way to visit my friend who is also now the mother of an African son...it all just felt too much. What benevolence. Once again, I am a lucky girl.

"She said that people complain when there is too much sun and it gets unbearably hot, and also when it rains too much or when it is cold. But, she said, no one grumbles when the moon shines. Everyone becomes happy and appreciates the moon in their own special way. Children watch their shadows and play in its light, people gather at the square to tell stories and dance through the night. A lot of happy things happen when the moon shines. These are some of the reasons why we should want to be like the moon." --Ishmael Beah 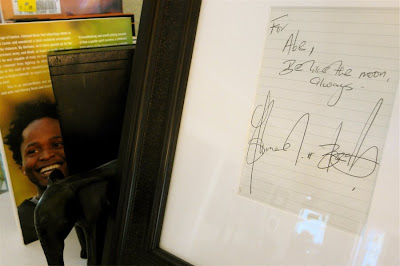 I just love this story for multiple reasons, his story (which is now on my must readlist) the srendipity of the meeting and the connection to Abe and the moon. Oh, and not to be discounted the beautiful way you wrote it.

That is so awesome. What a great memory and memento.

Truly amazing. Thanks so much for sharing!

That really is extraordinary. What a wonderful keepsake for Abe!

Seriously. Amazing. Is it just me or do you have pretty extraordinary travel experiences... I think it is not just me and it is in fact true.
Lucky you.
Lucky Abe.

you & your family are the moon, always
your life & path - moon
simply moon

Wow!! What an amazing story Lori..and what a treasure to have for Abe.

Wow. How very very cool! Glad you framed it and Abe will have it always. A treasure. Cool! Love M

Amazing Lori. And so beautifully told. I had chills.

This would be an excellent moment to google 'we like the moon' and see the craziest piece of animated singing ever. Not quite so poetic as your post, though...

Wow...Incredible. Ishmael's story is what prompted us to want to serve the people of Africa and ultimately adopt Malak. That's a beautiful story and how special that you were able to share a little bit of your heart with him! Awesome...

That is really, really cool, Lori.

That is spectacular. Wow.

Amazing story! I love him too and that smile......

We were in Aspen about the same time, where is the small town they live in compared to Aspen?? Wasn't it just lovely??