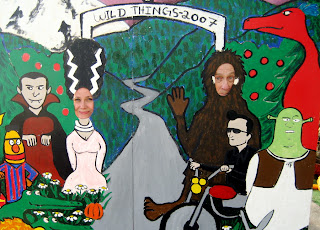 Monday was one of those days that I felt lucky to live in Oregon. We decided to go get apples and pears at the "Fruit Loop" in Hood River Vally with Ted's dad (featured with me at left). While waiting at a stoplight on our way to pick up Ed, a big black pick-up truck pulled up beside us. Our windows were cracked, and theirs were down completely. We suddenly heard those unmistakable first nine notes of "The Final Countdown" blaring from their truck. As Arrested Development fans, we looked at each other and smiled, thinking of those magic shows. We then looked over at the truck and the passenger leaned forward, made eye contact with Ted, and somberly punched the air with his fist. Without skipping a beat, Ted raised his fist in the air and shouted,"To the finish!!" right as the light turned. As we drove off, we could hear the two guys in the truck cracking up. This must be a thing they do at stoplights--great idea, guys--and they got the perfect response from Ted. It was a nice Portland moment.

If you ever do come to this area in the fall, you really must make the "Fruit Loop" drive. On the way east on the 84, you drive through the Columbia River Gorge past Multnomah Falls, which is such a gorgeous drive. Despite it being rainy in Portland and the Gorge, the skies opened up in the valley and we got to go to several farms getting fruit, apple cider, and jars of pepper jelly (I was the only one who liked the pepper jelly--I think it may be a Southern taste reminding me of my Maw-maw's house).

On the way back to Portland, it was raining pretty steadily, but off in the distance, about the size of a half-dollar in the sky, the clouds had broken and were lighting up the gorge and reflecting on the river. All around this one orb of light, the sky was a dark grey, so it was like a flashlight being shined on the river, making everything sparkly and other-worldly. I was driving at this point and was dying for a spot to pull over to get a long look. Ted kept saying that it looked like Narnia or Middle-Earth, that we should see furry hobbits or little elves scampering about.

Because there was nowhere to pull over, Ted took a few photos from the backseat. They really don't do justice to the scene, but maybe you can get a little of the idea: 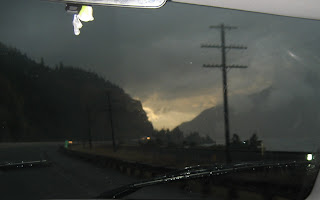 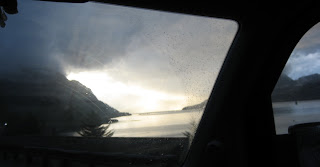 *
Adoption-related thoughts:
We've now been waiting a week now, I guess it's been. Another family who is about on the same time-line as we are had their dossier make it to Ethiopia this week, so we're expecting that to happen soon for us too.

I've been reading a lot of adoption-related articles, books, blogs, etc. and have come to appreciate the honesty that can be found here at Melissa Faye Greene's blog. I've been talking and writing with a friend in Mississippi about sleep and attachment issues and parenting in general. She pointed out that MFG's blog has, not just good advice for adoptive parents but for parents in general. I completely agree.

I've been encouraged by her honesty, how she doesn't sugar-coat anything, talking openly about the struggles of adoption yet also showing the small victories that can be had, like in the entry titled "Parenting Skills." It really gets you thinking about the idea of it taking a village to raise a child.

I remember when Hillary Clinton came out with that book back in the '90s, a lot of people in the Christian community blasted it, saying that it undermined parental authority in the life of a child (at least that's what I remember hearing about the debate--I was in high school at the time so only half-way paid attention). The older I get though, the more I'm realizing the value in that idea, especially for 'blended' families of various backgrounds.

And really--it takes a village to make most anything work, if you think about it. The term "doing life together" is thrown around ad nauseam these days in the emergent church movement (and boy, is that a whole can of worms), but there's definite truth to it, and it speaks to something that's missing in our culture here in America. We really are cut off from each other. How many of us drive into garages with access to our kitchens, never being able to say 'hi' to our neighbors? How many of us, when we are outside, are in the backyards where we have our beloved American privacy? How many of us sometimes sit on our front porches and talk to our neighbors? How many neighbors do we actually know?

And I'm pointing all fingers at myself here, really. I like my solitude, my alone-time, the millions of chances I have to indulge my introverted nature. When I walk into church, like my friend Brekah, I prefer not to be greeted by an usher. As a fellow introvert, she's started making a point of hanging out with her kids in her front yard instead of the back, just to try to capture a little bit of community. I think it's a good idea.

Ted and I were talking the other day about that movie The Break-up. It's not the best movie out there, but there were a couple of things in it that rang true for us. One big thing was that Vince Vaughn's character didn't do any changing until his friend called him on how his self-centeredness was ruining his relationships. His girlfriend had been trying to tell him this for a long time, but he couldn't hear it from her. It took someone in his "village" to be that honest with him and make him a better person. It's just like what happened in Melissa Faye Greene's family, with the Ethiopian babysitter being the one to break through the sibling conflict. The kids couldn't hear it from Mom. It took someone in the village.

So one of the things we're trying to do around here is to strengthen the ties to our village, for the sake of our future family. We've only lived in Portland for a little over a year, so putting down stronger roots is important for us.

I really like what Mary over at the Ethiopian Adoption blog wrote recently in this post about how learning about adoption-related issues is ultimately more important than all the paperwork. Yeah, easy for me to say now that we're done with the paperwork. I know, I know. I guess it just highlighted again to me the importance of preparing ourselves for the difficulties that will come with adoption. Having a village of friends, family, and experts around who will present the hard truth couldn't be more important.

Yesterday I grabbed several books on adoption from Powell's (yet another reason I feel lucky to live in Portland), one of which was a staff recommendation, written from a Christian perspective. The tagline was something about "inspiring, heartwarming stories." I sat in the store and read one story at random, getting so mad I wanted to throw the book across the room.

It was about this couple who struggled with infertility, gave up the dream of "their own kids," and settled on a Russian adoption. They got all the way to Russia and found out that the boy they thought they were going to adopt was sent to another family, and the child they were given instead was a girl who "looked just like them." They were amazed at how blessed they were to have been given a child with blond hair, who liked just like the mom. The couple then went on to give birth to three more children after this adoption, and the author even wrote teasingly about all the families who settle on adoption and then give birth.

This is heart-warming? The goal is to have a child who looks like you? It's inspiring to perpetuate the myth that couples who adopt usually later give birth? In the fantastic book Weaving a Family: Untangling Race and Adoption, Barbara Katz Rothman cites several studies about adoptive families that disprove over and over the theory that adoption leads to a family having children by birth.

I prefer the hard facts to pseudo-inspiring fluff any day. It's why the book I ended up buying, A Love Like No Other: Stories From Adoptive Parents (edited by Pamela Kruger and Jill Smolowe), is a collection of essays by all types of people with stories about the struggles, the difficulties, the disappointments, and always the triumphs that come when we let truth and love shine brightest.

After saying all that, I sat down this weekend and read the truly inspiring story of the family at From Axum to Here and found myself in tears at the honesty and humor. Plus, their baby is unbelievably cute and the two parents write really well. I was impressed by how they seem to have gone about their trip to Addis Ababa so openly and positively, which you can read about in this especially helpful entry. I was touched deeply by the story about their road to parenthood, the meeting with their son's birth mother, their compassion and openness, and how God has brought them full circle, blessing them with this amazingly quirky, drooling, wide-eyed little wonder.

And beautifully, their little guy even looks a lot like them, though just not in the typical way.
Posted by Lori at 10:46 AM

I've always wanted to do the fruit loop tour, that sounds really fun.

I'm impressed by how much you are reading up and learning about adoption issues and parenting issues. It will give you such a good start to know it won't all be happiness and delight. You are going to be a great mom.

Narnish! Love the PICS!! How beautiful. Thank Ted for taking the pics. I can't wait for Prince Caspian movie!!! Bekah and I still debate over the reading order...which one are you? As written, or chronological from beginning to end - Narnia time?
Love the name "Brekah" - why didn't we think of that!?