Strawberry Fields is, according to my Lonely Planet guidebook, the most visited part of Central Park. My niece and I entered the park from W. 72nd St. and made our way to the teardrop shaped memorial with the mosaic "Imagine" in the center, a tribute by Yoko Ono to John Lennon. My niece doesn't know very much yet about the Beatles, so I wanted her at least to see the crowds of people who are drawn to this memorial.

The "Imagine" mosaic was swarming with people posing for pictures. I wondered how many people were there just because they had the same guidebook I had and wanted a photo.

A scruffy man was sitting on one of the benches with a guitar playing Beatles songs. Three or four couples were sitting peacefully on the benches, listening to the music, seemingly there as a sort of pilgrimage. I took photos of them and walked away without one of "Imagine." This was New Year's Day. 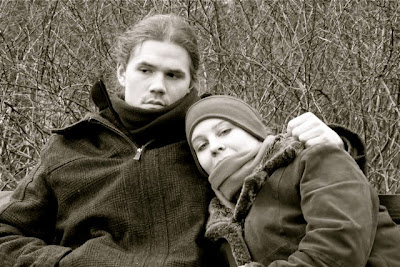